There’s something about simplicity that’s appealing and I found such simplicity in Iceland. It’s why I began a 7 month project photographing the island. Perhaps the landscape’s demeanor, an enlightened state of calm, is what made it attractive. I often find simplicity in nature and sometimes, in people. It’s what makes them both beautiful and at some point it’s a search we all undertake.

That state is something I also find during each trip northward. I don’t know why my travels unfold like this — the inexplicable feelings of being home; the waves of old memories that flood my thoughts when I reach a destination for the first time — I always find it in the high latitudes.

The first time I felt it was in Denmark, then again in Norway. Years later, in Iceland, I was older, experienced, different. I was no longer the immortal twenty-something roaming Copenhagen in summer. Nor was I the free-willed romantic passing through the shadows of Bergen’s permanent summer twilight. But it found me again. Call it what you like, a muse perhaps, but my first winter in Reykjavík left a mark and its meaning is still elusive.

I remember it well. It was late afternoon during my first day in Iceland. The winter sun had faded and I was chatting over steaming coffee and cold beer with a Reykjavík native in Kaffi List, a bar on Laugavegur. I was plagued by a voice-killing cold and burdened by heavy jet lag. This was further tainted by a wicked caffeine high. But there was an honesty that flowed in the way that only happens when strangers meet for the first time. Regardless of how I felt, everything in the world was right.

That first impression, and its rightness, made Iceland a special place for me. It sent me there seven times and helped me capture close to eight thousand images of its ghostly landscapes.

Photographers often capture the landscapes of Iceland. Like the American Southwest, it’s popular because of its stark beauty. The images of Iceland I had seen were fantastic — cascading waterfalls, lush meadows and endless horizons all taken in perfect light, only I felt they told just part of Iceland’s story.

But there was a challenge. As a working photographer and journalist, I had mostly photographed people. Landscape photography was as foreign as Iceland itself. I found creative inspiration easily when I remembered advice given to me early on: Photograph what’s important to you.

With that in mind, I drove thousands of kilometers across deserts, over mountains and through fields of lava while fighting hard to avoid taking the cliché landscape photograph. This collection of images is the result of those travels. This project is about being free from the constraints common to artists who compromise their vision just so they can fit into the contemporary art scene.

An example is Skógafoss, a waterfall just off of the main road on Iceland’s south coast. I had driven past it several times and noted the rainbow stretching over the falls. I finally stopped and captured it for those back home who would appreciate it. As I approached the waterfall, the colors retreated into the mist and I shot a few hundred variations of color and falling water.

That’s one of many stories of how a common scene turned into brilliant one and it’s why I became a photographer. It’s about finding the moment that’s truly yours. It’s about perfection. The context of this project brings to mind a statement attributed to Marcel Proust, “The real voyage of discovery consists not in seeking new landscapes but in having new eyes.”

When asked to describe my work, I don’t. I let the images speak for me. But I also want to hear someone else’s take, what the photographs mean to them…that’s what is really important and why I make these images. 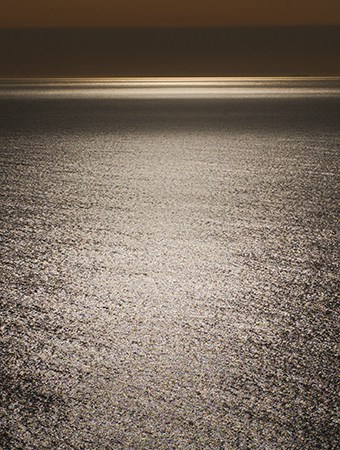